Just like every year, World Vitiligo Day 2019 too brought together many vitiligans, caregivers, physicians, researchers and volunteers under one roof. Those who could not attend a World Vitiligo Day (WVD) conference (organized ‘glocally’) celebrated the day in their individual capacity.

We, vitiligo fighters, have been tending to think less of our abilities and discount our success. Not anymore! This year, vitiligans were out with pride for roundtable discussions, friendship and fun. Thanks to a day dedicated to vitiligo awareness, we are slowly navigating toward official recognition of June 25th as the World Vitiligo Day by the United Nations General Assembly. Here’s what all happened around the world on the occasion of WVD 2019.

The international theme of this year’s World Vitiligo Day was ‘The Quality of Life of a Vitiligo Patient’. This year, WVD moved its global headquarter to Hanoi, Vietnam. With support from the Vietnamese government, the National Dermatological University Hospital of Hanoi organized the event under the expert management of Prof. Nguyen Van Thuong, Chairman WVD 2019.

A panel of renowned speakers covered a wide range of topics in vitiligo. While Prof. Torello Lotti covered the biology of melanocytes, a session on surgical therapies was held by Prof. Davinder Parsad. Another important session on novel herbal treatments was closed by to Prof. Michael Tirant. Many hospital and clinics across the country hosted special events for people with vitiligo as well. 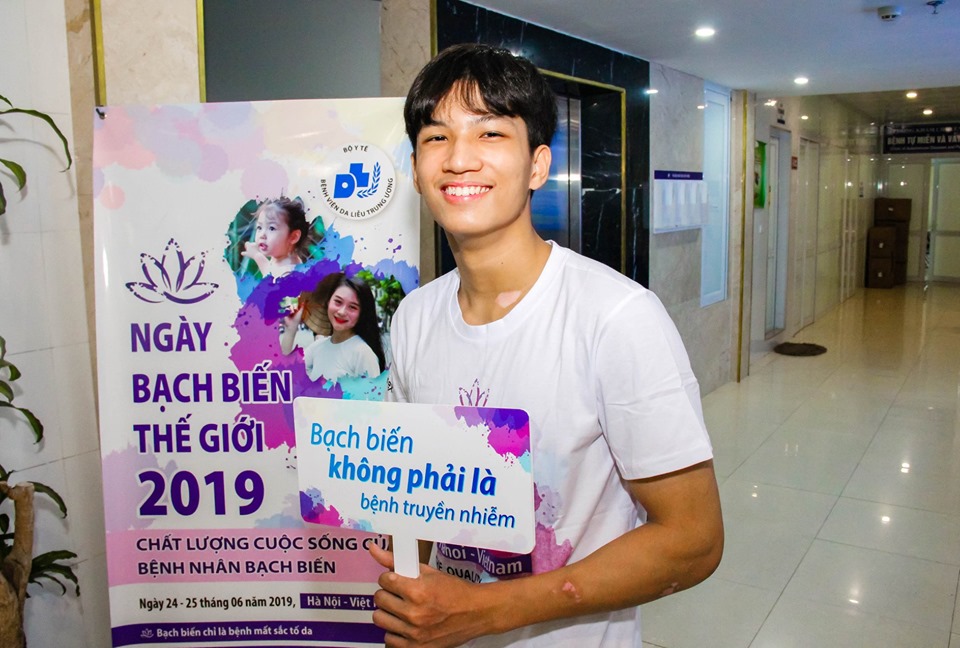 As per an estimate, about 4% of India’s population is affected by vitiligo. Perhaps, that’s why the country observed numerous awareness drive on the occasion World Vitiligo Day 2019. All India Institute of Medical Sciences (AIMS), Patna called for a WVD conference where free counseling was given to OPD patients with vitiligo. While SupportVitiligo.org conducted a placard campaign on social media, AARUS Foundation held a WVD celebration event in Mumbai. A series of programs were also organized in the city of Aurangabad at the Indian Medical Association (IMA) hall, under the supervision of Aniruddha Gulanikar – a renowned Indian dermatologist. Other social organizations, like Lion’s Club Midtown, Midtown Medical Services Trust and Advya Medical Foundation too, organized awareness and treatment camps in the city. The silimar awarness drives were held in Bengaluru and Mangaluru.

Now, a news from east India. Mamata Banerjee, Chief Minister of the of West Bengal took to Twitter to spread awareness on the skin condition. She was the only political figure from the country who tweeted about WVD.

Today is #WorldVitiligoDay. We must pledge not to discriminate against anyone on the basis of skin colour

Moving to the southern belt of India, the first National Convention for Vitiligo was organized by the Leucoderma Awareness Movement in Tiruchi, Tamil Nadu. The convention was held at St. Joseph’s College on World Vitiligo Day under supervision of K. Umapathy, Secretary, Leucoderma Awareness Movement – India. About 200 people with vitiligo took part in awareness drive, in addition to students in large numbers. 17 doctors held different sessions on vitiligo and its treatment through allopathy, plastic surgery, and psychology. During his interaction with the media, Mr. Umapathy urged the Centre and the State government to create awareness of World Vitiligo Day just like Polio. He proposed the education systems to include vitiligo in their syllabi.

It was for the first time when Sri Lanka, as a country, celebrated World Vitiligo Day. The event had its own logo, which featured Nadungamuwe Raja – Sri Lanka’s national treasure. Most Asian elephants including Nadungamuwe Raja experience some de-pigmentation, characterized by pink freckles on the skin – something we all observe in vitiligo.

The most important aspect of these WVD celebrations was patient and medical staff education program. The event, which was held at Base Hospital, Elpitiya was concluded in the presence of 100 participants. WVD t-shirts were also distributed at the event to give long shelf-life to vitiligo awareness.

Fatimah Abdulaziz Alkhaldi, a Saudi Arabian medical student, shared her artwork on social media to empower women with vitiligo and helped the world see beauty in different lights. Fatima is also the CEO of TEDxKSAUHS’19, a nonprofit organization devoted to Ideas worth spreading. The conference attracted nearly 300 attendees, including vitiligans and their family/friends, as well as expert dermatologists. The theme of this year’s conference was “The Mental and Medical Journey of Living with Vitiligo: It Starts with ME!” The 2019 conference speakers included Dr. Amit Pandya, Dr. Alanna Bree, Dr. Pearl Grimes, Dr. Lisa Schuster, and Dr. John Harris. The speakers covered various topics like ‘new research discoveries’, ‘treatment of vitiligo’, ‘coping / after the diagnosis’, ‘addressing the physical, social, emotional, and spiritual wellbeing of children with vitiligo’ and ‘vitiligo and social acceptance’.

Growing up, the imagery we saw in the media had an immense impact on our self-confidence. Sadly, the characteristics society glorified as “beautiful” did not include vitiliginous skin. Additionally, the limiting Eurocentric ideals of beauty made so many women with vitiligo feel marginalized.

On the occasion of World Vitiligo Day 2019, Dove’s social media handles published the stories of Beatriz (a psychologist student) and Renata Cadilhe (a model with vitiligo from Rio de Janeiro), under its inclusivity campaign #ShowUs. “Reminding us that beauty can be whatever we want it to be, they’re redefining the ideal of ‘perfect skin’ and inspiring others to love themselves too,” personal care brand wrote in the caption.

Today is #WorldVitiligoDay – a date where millions of people across the world come together to raise awareness of vitiligo ❤️ Here are the stories of Beatriz, @renatacadilhe, @marielenander, Zenazi and @nutopiabynuriatorrente ❤️Reminding us that beauty can be whatever we want it to be, they’re redefining the ideal of ‘perfect skin’ and inspiring others to love themselves too. Swipe right to read👉 @girlgaze 📸: @isabelladiasx 🇧🇷, @jabunewman 🇿🇦 💻: @gettyimages #Dove #RealBeauty #Vitiligo #VitiligoAwareness #BodyPositive #BeautyStandards #BodyConfidence #ShowUs

World Vitiligo Day 2019 was commemorated in Mexico differently. Dra. Karen Férez organized an event that included an exposition of professional photographs of people with vitiligo, taken by Panoramic Lab. The event empowered vitiligans to flaunt their spots, which helped them feel beautiful, strong and supported. The event was concluded with a makeup workshop by Dermablend, which was all about having a choice to camouflage vitiligo. KweséTV, Ghana organized a chat show through which viewers were able to meet a few vitiligo fighters and know their vitiligo journey. The show discussed the struggle of dealing with the racial dynamics of turning white in length. The French Vitiligo Association (Association Française du Vitiligo) is the Europe’s oldest vitiligo support network, operational since 1992. The association organized rallies inclining towards vitiligo awareness on June 25th, all over France. Interested candidates could register for the event via the association’s official website.