Amidst India’s obsession for the perfect body, fair skin, and razor-sharp face features, people with vitiligo stand no chance to be celebrated on public forums. On top of it, myths around vitiligo make things worse and often leave vitiligans with social isolation and strange stares even though the skin condition is absolutely non-communicable or contagious. These could be just a few of many reasons why those who are living with vitiligo find it difficult to embrace their imperfections in a country like India.

But, with vitiligo’s ‘better than ever’ representation in media and popular culture, we as Indian are slowly eradicating these misconceptions, to normalize vitiligo up to some extent. We owe these positive changes to some influencers, who, in their individual capacity, are raising awareness of vitiligo and trying to remove the social stigma attached to it. These vitiligo awareness advocates are:

India is one big country where the stigma attached to vitiligo is extreme. But, it is also the same nation where vitiligo awareness is growing quickly. Thanks to vitiligo awareness initiatives like SupportVitiligo, which focuses on debunking common myths associated with vitiligo/ leucoderma, online and offline. SushAmita Pradeep Jain, aka Sushmita Jain is the girl behind the initiative.

SupportVitiligo is India’s oldest vitiligo support network, which traces its origin in 2014. It started as a video awareness project, which received an overwhelming public response. The same video which launched SupportVitiligo on the ground received 7000+ shares, 500000+ views, and 14000+ likes in just one week. Today, the support network is reaching more and more people through social media, emails, placard campaigns, and educational talks. Akash is the founder of AARUS foundation, a non-profit organization that is working on building vitiligo awareness on the grass root level. Based in Mumbai, Akash often travels across the country to conduct workshops at educational institutes, to extend awareness on vitiligo. In an interaction with Unite For Vitiligo, Akash shared AARUS foundation’s expansion plans, “Small villages and towns are our main focal as well as pain areas where people need to be educated so that vitiligo is not considered god’s curse anymore.” India’s first model with vitiligo, Shantanu flaunts his skin with confidence and swagger. Now 22, Shantanu was 10 when he had his first encounter with vitiligo. He decided to ditch the makeup and embraced his vitiligo happily.

Shantanu’s journey to fame started with a modeling gig for a local retailer. While posting his pictures on social media to attract brands that were looking for unconventional models like him, he met ace photographer Arka Patra. One of the pictures from this photo-shoot was picked up by Vogue web portal and he was subsequently hired by YBP Cosmetics as an Influencer.

A blogger, dual skin artist and a TEDx speaker, Kartiki Bhatnagar, is one of the most influential vitiligo activists from India. Based out of New Delhi, Kartiki was diagnosed with vitiligo at the age of 7. After turning 17, she transformed her skin into beautiful art.

By drawing beautiful designs on her white patches, she is conveying how aesthetically one can embrace his/her vitiligo. After feeling like an outcast in society, she has successfully defeated vitiligo and risen up to be a woman of power and strength. 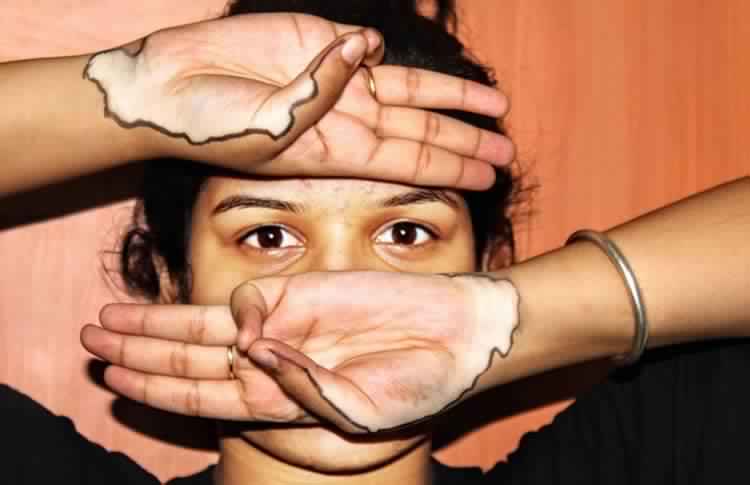 Prarthana noticed her first vitiligo patch at the age of 11. It took her 8 years to ditch makeup and feel the sun on her bare face again. Ironically, Prarthana runs a Beauty-Makeup YouTube channel today. However, her vision regarding this one is clear. She runs the channel, not to teach anyone to mask their faces with makeup, but to experiment and have fun with it. As far as a white patch on her face is concerned, she wears it as a badge of honor.

Today, the beauty vlogger is using social media as a tool to create awareness of vitiligo. Apart from make-up tutorials, her videos largely talk about her journey to success after enduring bullying for years. Isn’t that inspiring? Rakesh and Ekta experienced strange stares, annoying questions, bitter comments, and social isolation before getting married to each other in 2016. Today, both work together to promote vitiligo awareness as a power couple. They are brand ambassadors of dermamatrimony.com – a matrimony website purposely designed for people with vitiligo. After being featured in tonnes of articles, Rakesh and Ekta spend time in running a plywood trading company and creative designing, respectively.

The founder of ‘Vitiligo India’ Instagram handle is encouraging vitiligans to look at the bigger picture and recognize the fact that vitiligo is indeed a blessing in disguise. An entrepreneur and occasional YouTuber, Shivaji showcases the beauty of vitiligo in a different and positive light. So, if you start your mornings with scrolling through Instagram, following @vitiligoindia can be a good way to kick-start your day with positive intentions.