We can partially blame social media for being a breeding ground for people who put filtered snaps out there, perpetuating a misunderstood nation of beauty. But, thankfully, we have many inclusion influencers in the UK who are exhibiting their refreshing take on reality and vitiligo. These are the new heroes who are shining a light on vitiligo by talking about it, bursting myths around it online as well as offline. These vitiligo awareness advocates are:

At 12, Laura was diagnosed with vitiligo. For years, she endured bullying at the hands of her classmates. After years of hiding it beneath makeup, Laura, aged 22, decided to enter Miss Continental pageant as England’s contestant.

Laura who has patches on her hands, feet, and chest is now speaking out about the stigma surrounding vitiligo. Her focus is on encouraging more and more young girls to enter beauty pageants, challenging the misconceived notion of beauty. “Too many girls worry they don’t belong in the pageant world which is wrong. Anyone can enter, and they can do well. There is so much more to pageants and I have competed in eight altogether, finishing first in three,” the pageant queen told The Sun in an interview. 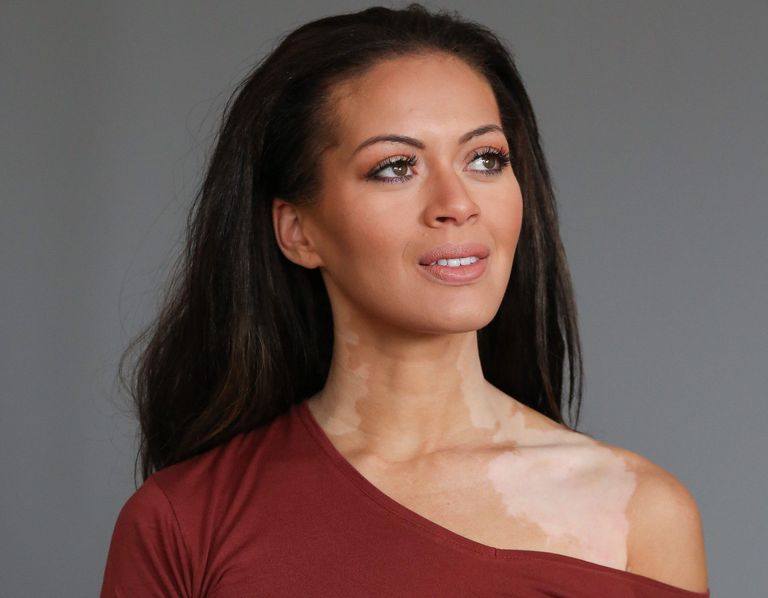 Dean was nine when he was diagnosed with vitiligo. After appearing on the BBC’s MasterChef in 2006, his career blossomed. He first appeared on ITV’s This Morning in a cookery slot before becoming a regular on the Lorraine show. Despite Dean taking measures to minimize the appearance of his vitiligo, it was during summer that TV close-ups on his hands revealed the patches.

He soon stopped covering his patches with makeup and began to use his social media presence to raise awareness about vitiligo. Now a regular blogger on the subject, Dean has also been making television appearances in which his skin condition is the focus of the conversation.

Natalie, a vitiligo awareness advocate from London, has been doing her bit to represent the skin disorder in media. She has appeared on London Live, The Lorraine Show and was part of a BBC3 special. Her story has been featured in New!, Happiful, Fabulous magazine, Phoenix, and Blackhair Magazine. She has also been running an inclusivity platform called ‘Being Just Us’.

This May, Natalie was invited by Sylvia Mac, the founder of Love Disfigure (a social media support network for people with visual differences), for a photo shoot to mark Mental Health Awareness Week. Lastly, she was featured in Dove’s another inclusivity campaign #ArmsUp. The 25-year-old skin inclusion activist says it took him seven years to embrace his vitiligo. After being featured in Brock Elbank’s well-received vitiligo portrait series, Shankar led a few influencer marketing assignments for Rebecca Violette and Remington UK. He has been featured in Conker Magazine and is best known as the ‘Vitiligo Man‘ on social media, sharing the powerful message of self-acceptance via the ‘#1for1 campaign.

Lastly, Shankar addressed leading industry professionals at the London Stock Exchange during the launch of Changing Faces’ new campaign #PledgeToBeSeen. Changing Faces is the UK’s leading charity for individuals with visual differences. Shankar has been working the charity as an Ambassador since December 2018.

Joti noticed her first vitiligo patch at the age of 21. It took her years to accept vitiligo and embrace it. The London-native has been working towards raising awareness against aesthetic prejudice of vitiligo since then.

Joti’s social media handles represent a true reflection of living with vitiligo and coming to terms with it. She was photographed by Brock Elbank for his Vitiligo Portrait series and was part of a documentary called MisFITS. She has written articles on vitiligo for her school newsletter and has been regularly microblogging, emphasizing the challenges faced with the condition. Joti’s most recent vitiligo awareness talk was aired on BBC Radio London.

Alec was six years old when he first noticed his first vitiligo patch. Aged 12, he decided to cover it up with make-up, which would soon become his comfort blanket. At 15, he gathered the courage to go make-up free and embraced his ‘real-self’. Things changed from them on. He got spotted by a talent scout later and signed to a modeling agency. Soon, his face (with vitiligo of course) was on a billboard in east London.

Alec has walked the ramp in London Fashion Week. He has been featured in 2 BBC Features and many fashion magazines. He continues to sign brand endorsement deals, strengthening vitiligo’s representation in the UK’s modeling landscape.

Looking different can be a mighty motivator and Carissa is living proof of that. When Carissa was diagnosed with vitiligo, she had no one to look up to. Today, many young girls with vitiligo look up to her.

In the last few years, Carissa has led multiple vitiligo awareness drives through her social media accounts. Apart from being featured in multiple articles on the internet, she has been part of Brock Elbank’s 63-Part Vitiligo series. The Philanthropist has also been the inspiration behind Samantha Parkhouse’s vitiligo art exhibition.